Pumpkins are everywhere this time of year and the last thing you probably want more of is: PUMPKINS! So, instead of carving a jack-o-lantern for Halloween here are four other fruit and veggies that will do the trick…. or treat! 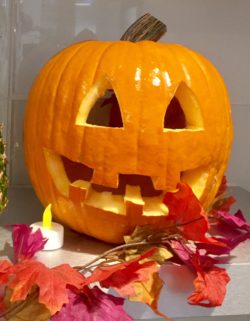 This nutrient-dense fruit is best known for being “healthy fat”. It’s loaded with vitamins and minerals, and it’s ability to help you absorb nutrients gets a thumbs up from many dietitians and even some craft addicts. Since the skin is a ghoulish dark green and easy to slice, it makes the perfect Av-o-lantern. When carving an avocado be sure to cut the eyes and mouth from your Av-o-lantern first; the peel is thin so it helps that there is something inside to press against while cutting. Then cut out a hole in the back large enough to scoop out the guts and the pit and be sure to save those insides to eat later. Lastly, light the inside with a battery operated tea light and you’re all set. You can create enough to make an Av-o-lantern display for your Halloween party with some guac on the side! 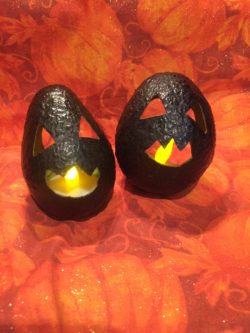 Since an orange is the perfect color to masquerade as a pumpkin, it makes the perfect jack-o-lantern. To carve an orange, slice the top off first then scoop out the insides. Once it’s clean give it a quick rinse in a bleach bath to help preserve the rind. Using a hobby knife cut out the eyes and mouth. You can fill these cutie-pie pumpkin impersonators with grapes for a snack bowl for the kids or illuminate them with a tea light. Are they mini pumpkins or are they oranges? That’s what your friends will be asking with this DIY delight. 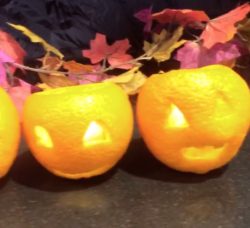 It’s an actual “Mr Potato Head” when you carve a spud. It may seem a little daunting to think you can actually cut thru a uncooked potato but it’s easy. Start by cutting off one end of the potato. Then using an apple corer, pull out sections of the inside of the potato; be sure not to push the corer thru the top of the potato. Once you make several slices to the inside, the smaller bits can be spooned out. Since the skin of a potato is thin and typically peeled off, you will need to leave a little extra potato thickness under the skin. Draw on some eyes and a mouth then using a hobby knife cut them out. If you carve these ahead of time, soak them in water and store in the refrigerator to keep them from turning brown. You can light the inside with a battery operated tea light and create your own Potat-o-lantern patch. 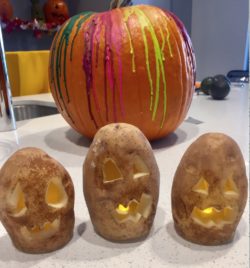 This sweet fruit is used to garnish hams, served as a dessert and even ordered as a topping on pizza! Don’t throw the spiky exterior in the trash use it to create spooky or goofy home decor this Halloween. To carve a pineapple, first cut off the thorny top and set aside. Then using a pairing knife, cut around the inside edge of the top of the pineapple; a carving tool set is handy to scoop of the insides. Continue the process until you have a hallow pineapple. The skin already has hexagonal shaped units in it so use them as a pattern to cut out eyes and a mouth. Finally, light the inside with a battery operated tea light and pop the lid back on. All those spines on top create a wicked personality for your Pineapple-lantern. 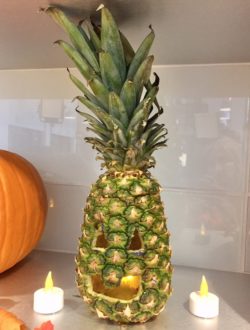 Since you have now mastered the art of produce carving you can essentially carve anything…. try carving a mini watermelon, or eggplant, or bell pepper, or even an apple. Have fun with it and get creative. Who said you can’ t play with your food after all. 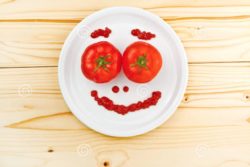